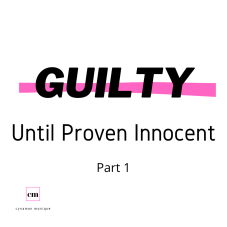 You might think that I made a mistake with the title of this post but I did not.  Presumption of Innocence, or better known as Innocent Until Proven Guilty, is a phrase that is often used not only in the United States but also in many other countries.  It means that a defendant is innocent until proven guilty.  In other words, the prosecution must prove, beyond a reasonable doubt, each essential element of the crime charged.  If reasonable doubt remains, the accused must be acquitted.

While this should be the case, it clearly is not meant for everybody here in the United States. Recently, George Floyd, Ahmaud Arbery, and Breonna Taylor are three separate instances within a three-month time frame in which they have been determined Guilty Until Proven Innocent by the people who killed them.  Just to recap what happened to each person, George Floyd died after a police officer forced his knee into his neck and kept it there despite pleas from the man as well as bystanders to get off of him because the officer believed he may have been responsible for forgery.   Breonna Taylor was shot to death after police were serving a “no-knock” warrant at the wrong house for a person that was already in custody.  Ahmaud Arbery was hunted down by a father and son while he was jogging because they believed Arbery was responsible for a string of burglaries in the area.

In all of these cases, the victims were sentenced to death before having the opportunity to share their side of the story.  When a mass shooter such as the person who killed 9 people at a church that welcomed him in Charleston, South Carolina (I prefer to not use his name) can be apprehended without incident, then why do we continue to hear stories such as the ones above?  Even if they ended up being guilty after going through the justice process, the crimes they are being accused of would not have warranted death.

It is hard being black in America and hearing story after story of people having their lives taken away from them because another person decided that they have the authority to sentence a person to death eats away at me.  Who gave them that right? I always have to think about how I will be perceived if I’m in a certain area.  How will my family be perceived?  Will people think that we are up to no good?  Will they think that I need to be “put in my place” because I could be a potential threat?  Will my husband be perceived as a “thug” because he’s tall and black?  If I am ever accused of anything, will I even have the opportunity to defend myself?  One day, we will have to tell our children that we aren’t able to act a certain way even if we see other people acting that way.

Despite the number of times that I hear story after story of people deemed guilty and sentenced to death on the spot, I currently have a little hope that the future will look a little brighter.  I want better for my daughter and her generation.  I have some ideas on how we can work towards a better future in Part 2.  While this series is for all parents, I want for my non-black parents to really pay attention.

This site uses Akismet to reduce spam. Learn how your comment data is processed.